You are here: Home / News Archives / Featured Alumni Under 35 to Watch: Jeff Simms ’10

On a sunny afternoon in the Rooms café, I had the pleasure of interviewing Jeff Simms, Class of 2010.  Jeff was an extraordinarily talented student who excelled at sport and music.  He was a man for others and shared his time and talents with our school community but also through his outreach at MacMorran Centre.

Jeff describes his experience at St. Bon’s as having so much depth and he found it hard to pinpoint one experience because he attended the college from grades 3-12. He found it necessary to sum it up in little bits. He called it a grooming experience and a molding place.  He describes the experience as having freedom to be who you are and want to be and then become who you need to be. He says there are ups and downs going to a private school but when it comes down to making the decision to go to another school or stay at St. Bon’s, it did not add up or make sense to go somewhere else.

His fondest memories at St. Bon’s besides toilet papering trees in Europe, are hanging out with his friends and recounting the many memories that made St. Bon’s   He could not pinpoint just one, there were so many.  He did take away, being someone for others.  He always looked for grand gestures to make a difference and never quite found the satisfaction in anything he did because once he graduated, he realized it had nothing   to do with grand gestures and all to do with the little daily things that you do to be a person for others.  It is little things that add up to help shape what St. Bon’s sets out to do in shaping students.  St. Bon’s is the big grand thing that releases all these people to go out and do the little gestures in our world to make the difference and gives an aura of greatness.

As an actor and performer, St. Bon’s impacted Jeff’s career path by preparing him through the world renown music program and working under Kellie Walsh, Vicenza Etchegary and Brenda Gatherall, as a musician, you grow. He could not express his gratitude enough for what they gave him.  He was able to graduate from the MUN School of Music and even though the school did not have an acting program, because he was able to be himself and foster his gifts and talents, he is a successful performer today.  There is no stigma or high school kind of fear and because of this he was able to express himself fully.  It opened him up to be an actor and enable him to connect to his characters.

Since graduation, Jeff has continued his service work.  When he was in high school he volunteered as a tutor at MacMorran Centre and the Gathering Place.  Once he graduated Jeff worked at the summer camp and this became a position as Program Coordinator of the tutoring program.  He orchestrated the program and getting the kids into the centre.  He ran the afterschool programs as well.  He also coordinated and created the music programs and well.

His advice for students at SBC today is do not stop trying and seek the opportunities that are presented.   People are people and you cannot be selfish, you have to be a person for others.  You can seek for fame and fortune, there are things that you can strive for but ultimately, if you are not helping the world or someone else, there is no point seeking it.

Presently, Jeff is portraying Thomas Nangle in the production “Call to Arms”.  A quite fitting role for Jeff.  Thomas was a soldier priest who was a graduate of St. Bon’s.  Nangle excelled at sport and was a true man for others. Jeff certainly can attest to being a person for others from his commitment to Christian service, Kairos leadership and his athletic successes with basketball. 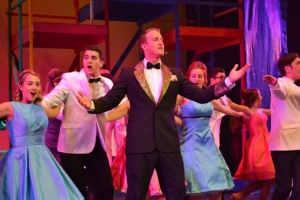