Ken began his practice with Lewis Sinnott Shortall Hurley in St. John’s where he benefited from experience in a broad range of legal matters at all levels of Court within the Province of Newfoundland and Labrador as well as the Federal Court of Canada. He joined Rogers Bussey Lawyers in 2003 and since that time has developed a busy practice concentrating primarily in the areas of Personal Injury, Real Estate, Criminal Law and Wills and Estates. Ken was a founding partner of Bristow Moyse Lawyers, which was established in early 2008. In February 2015, Ken joined forces with Richard Rogers and Mark Rogers as founding partners of the firm Rogers Rogers Moyse.

Ken was born and raised in St. John’s and now lives in Torbay with his wife, Angela, and their two sons, Andrew and Ian, Grade 8 and 4 students at St. Bon’s.  Ken enjoys an active lifestyle with his family including camping, hiking and travelling and during the winter, is most likely to be found at any one of the local hockey arenas with one or both of his sons. 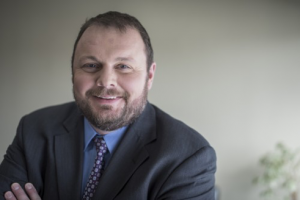