Before graduating from St. Bon’s in 2004, James Hurley was extensively involved in the school’s music program. In fact, James acknowledges that the school and its music director, Vincenza Etchegary, provided him with many opportunities and freedoms to explore his talents, and laid the foundation for him to follow music after high school. James loved the small, supportive structure of the school – especially the many band trips, concerts and musicals he was able to be a part of.

After graduating from St Bon’s, James completed a Bachelor of Music in Piano Performance at Memorial University and a Master’s of Music degree from the New England Conservatory in Boston. In 2011, James and his future wife, Olivia Friemel, moved to Munich, Germany.

James & Olivia moved to Neuburg an der Donau, Germany in 2015, where they opened Più Piano, which would be used during the day to teach students, and could be used at night for concerts. They have hosted several Newfoundland and international artists. The popular Newfoundland group, The Once, will perform there in the fall of 2018. Più Piano has since grown to a full piano studio with more than 70 students and members ranging in age from 3 months to 76 years old.

Exactly one year after opening the doors to Più Piano, Olivia & James welcomed their son Oscar. James would improvise songs for Oscar to help him sleep. In November 2017 James released his first CD, a collection of these original melodies, titled Nightscapes. A mix of improvisational, jazz and classical elements, the CD is meant to relax infants and adults alike. Within the peaceful music, James has hidden two popular Newfoundland melodies – he was famous for sneaking Super Mario music and Bohemian Rhapsody into his St. Bon’s performances. Nightscapes is available at Fred’s Records, O’Brien’s Music and the St. Bon’s Principal’s Office.

James strives to incorporate Newfoundland culture into his business – it’s important to him to stay true to his roots. He describes his studio as “a Newfoundland living room in the middle of Germany”. With a passion to build a bridge between his two homes, Più has many traces of Newfoundland, including the JC Roy paintings covering the walls.

Olivia & James are working to invite Newfoundland students to Germany in a piano student exchange. This is slated to take place in 2020/2021 and is open to any students learning piano. People interested in this prospect should contact James at his website listed below.

James’s Piano Studio, as well as a preview of the CD can be found on his website at www.piupiano.de

James will be performing at the Gros Mourne Summer Music Festival with local musician Duane Andrews in August of 2018. He also hopes to make it home to St. John’s for a live CD release & performance this coming spring. For more information, you can visit James’ website. 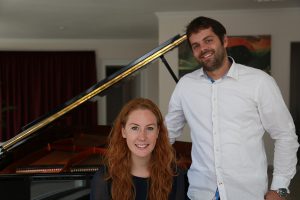 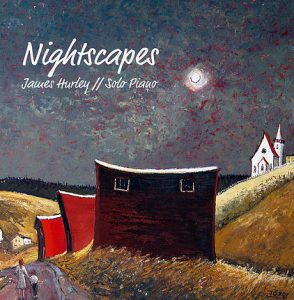