From February 24th-27th, Mrs. Annette Mallay and Mr. Milan Parab represented St. Bonaventure’s College at the Jesuits of English Canada, Education of Youth Meetings in Winnipeg, Manitoba.  The committee meetings annually to bring together the Jesuit schools in Canada: St. Bon’s, Loyola High School in Montreal, St. Paul’s High School in Winnipeg and Mother Teresa Middle School in Regina.  This year we were joined by a representative from Canadian Jesuits International from Toronto.

The annual meeting focuses on Jesuit Mission and Identity and Ignatian Pedagogy. This year the Committee welcomed the newly formed Gonzaga Middle School which is slated to open in Winnipeg in September 2016.  Through large and small groups seminars, the representatives discussed topics such as the Standards and Benchmarks for Jesuit schools, reviewed school reports and examined how schools could respond to the Truth and Reconciliation Commission Report.  They shared teaching and learning strategies and engaged in classroom observations. Faith and Spirituality were themes throughout the meetings ending with planning of next year’s meeting slated for Regina.  All participants were grateful for the warm welcome and hospitality of St. Paul’s High School in Winnipeg. 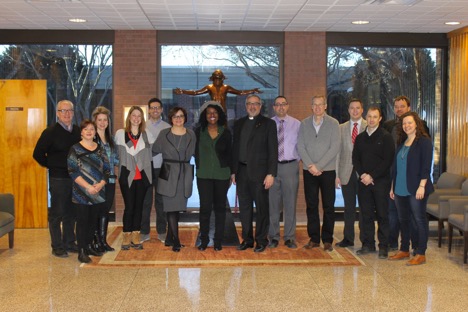